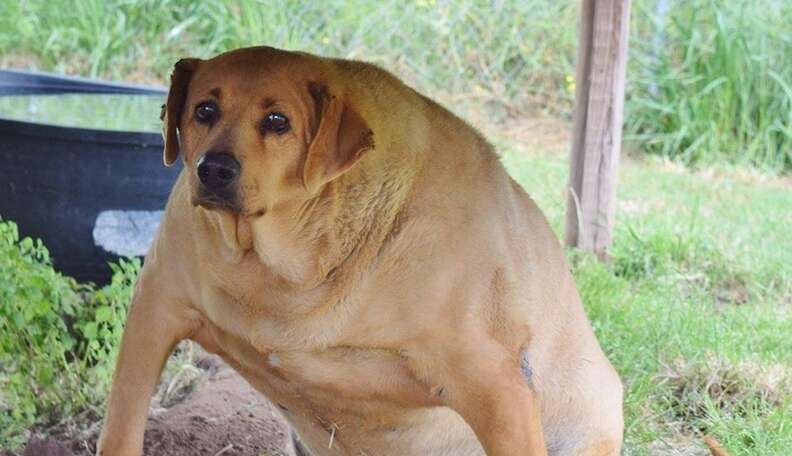 They did know that she had been at the sanctuary for five years. But the woman who owned it was diagnosed with cancer, so she reached out to local rescues to see if they could take the animals.

It took a handful of people to help lift and remove Daisy from the property. She was taken in by The Forgotten Pet Advocates (FPA), in Pearland, Texas.

So much is difficult to determine about Daisy because of her condition. “Her coat is in bad shape because of her poor health,” Amy Beasley, who is fostering Daisy for the FPA, told The Dodo.

“We don’t know how much she weighs and we can’t load her into the car to go to the vet,” Beasley said. “So the vet is coming here to take blood and run tests.”

“She can walk,” Beasley said. “She just is very cautious about what she decides to do. She went out the back door yesterday evening, and she got down one step. But she heard other dogs barking in other yards and said, ‘Nope,’ and went back inside.”

Daisy had been in a pen at the sanctuary with two other dogs. When she was taken from the only home she’s known for years to a temporary facility, she was in a strange place. She would not eat. Then she immediately went to the Beasley home and she was nervous once again. Because she was used to a smaller, confined area, FPA ordered a crate that is large enough for Daisy.

“I can tell she wants to be in a confined space and feel safe,” Beasley said.

Beasley’s dog, Hunter, has taken a liking to Daisy – he also came from a shelter.