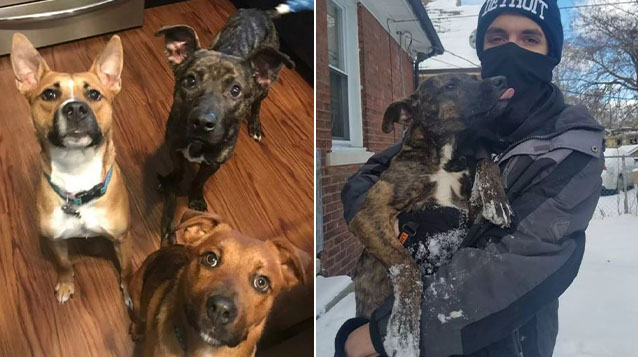 “She was holding her paws up because she was so cold.”

The dog needed to get warm — desperately. She’d already spent the entire night shivering outside in a blizzard after her owners had left her chained up in the yard. If she stayed outside any longer, she was going to die.

On Tuesday, a neighbor noticed the 2-year-old dog trembling out in the snow and knew she had to do something. So she called Detroit Pit Crew Dog Rescue, an organization that rescues stray, injured or sick dogs in Detroit, Michigan, and asked rescuers to come get the dog.

“We received a call from a citizen of Detroit who seemed to be very frantic that her neighbors were leaving this dog outside in the cold, and left her out all night,” Theresa Sumpter, founder and director of Detroit Pit Crew Dog Rescue, told The Dodo. “She was holding her paws up because she was so cold. If we didn’t come and help this dog, this concerned citizen was afraid that this dog would die.”

Knowing that this dog was in immediate danger, rescuers hurried to the property to try and take the dog into their care. Last February, a new law passed that made it illegal for owners to tether a dog outside for more than three hours — and the owners of this dog had obviously broken the law.

The owners were home, but they refused to speak to the rescue team. So the neighbor went inside and convinced the owners to surrender the dog to Detroit Pit Crew Dog Rescue.

Oddly enough, the owners had another dog — and this dog was allowed inside the house.

“[The neighbor] opened the door to show me that the other dog was inside, and she said that [the owner] didn’t want the dog that was outside anymore and they were just going to leave it out there,” Sumpter said. “So I went ahead and said, ‘Yes, we’ll take the dog. She’s obviously injured and she’s cold and she can’t be out in this weather.’”

The rescue team named her Blizzard after the ordeal she’d lived through.

Blizzard couldn’t contain her happiness and relief. “We knew that she was sweet when we picked her up,” Sumpter said. “She was licking my helper.”

When they put Blizzard into their truck, the dog curled up in a tight ball and dozed.

Blizzard was out of the cold now, but she needed to get to the vet right away — her paws were swollen and infected and frostbitten. “She’ll make a full recovery,” Sumpter said. “But it was pretty bad, and she was really cold.”

But Blizzard didn’t need to stay at the vet long. The next day, she went into foster care with two other dogs, Noelle and Cholo, who were also saved by Detroit Pit Crew Dog Rescue.

“She is very happy in her foster home and loves the other doggies,” Sumpter said.