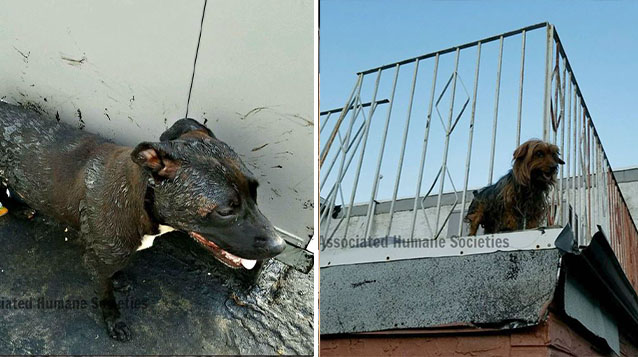 Sometimes, there are simply no words for how cruel people can be.

The Associated Humane Popcorn Park Shelter received a call recently about two dogs left outside in the heat in Newark, New Jersey – on the roof of their family’s home.

The roof was flat and covered in tar, and because the temperature that day reached 96 degrees, the tar was bubbling and boiling, burning the poor dogs all over. When the dogs were found, they were “dancing” frantically around the roof to try and keep their feet from burning.

The dogs, a pit bull and a Yorkie, seemed like they probably wouldn’t be able to last much longer in the scorching heat. “The Yorkie continuously ran to the edge of the roof to try to find an area that would not burn her further while the pit bull, covered in hot tar, had nearly given up hope,” the group wrote on its Facebook page.

It was clear the dogs had probably been up there for quite some time, as the roof was covered in feces. There were some dishes of chicken and rice left up there, but no water whatsoever.

“Our officers carefully removed the overheated and distraught pair and brought them directly to an emergency veterinary hospital,” the group wrote. “The dogs are severely burned and their condition is guarded at this point.”

Both dogs sustained severe burns all over their bodies, but rescuers are doing everything they can to help them recover. They’ll remain at the vet’s for the next few days while they heal, both physically and emotionally.

The case will be under investigation, and no charges have been filed as of yet. If you’d like to help these sweet dogs, you can donate to the Associated Humane Popcorn Park Shelter.

As temperatures continue to soar, remember to look out for signs of heat stroke and keep your pets safe.