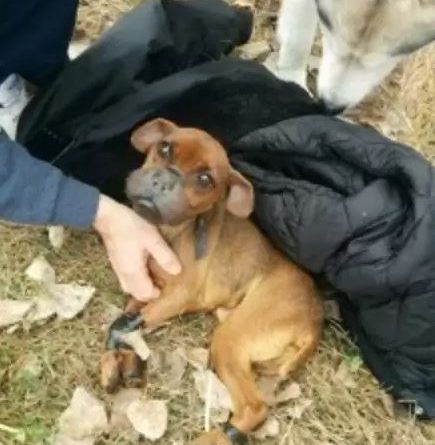 A man who said he was dropping off a dog at an animal shelter, but instead bound him with electrical tape and left him to die, will spend the next two years in a federal prison.

An Ontario court heard Michael Hill of Windsor, Ontario, took $60 from a couple to deliver the dog to a local shelter. The 13-pound dog’s original owners, according to testimony, were unable to keep him due to their newborn daughter’s allergies.

The dog, since named Justice, was found with his legs and muzzle brutally bound in a field behind a Canadian Tire store.

Veterinarians said he likely wouldn’t have survived a couple of hours more.

“There is no other way to describe this act; it’s a despicable act of depravity,” assistant prosecutor Craig Houle told the court on Monday.

In addition to a the prison sentence, Hill was given three years probation and a 25-year ban from owning or living with animals.

While Ontario’s animal cruelty laws are touted as the strongest in Canada, it’s still an unusually stern sentence.

In a similar case from 2012, John Mackenzie of Belle River, Ontario, was convicted of animal cruelty after taping a dog’s muzzle shut and tying him to a tree – with fatal results. His sentence? Despite Mackenzie’s “wanton and callous” act, a judge sentenced him to just four months in jail.

Even that sentence is certainly a welcome progression from past cases across Canada.

In 1989, for example, an Alberta man who beat his dog to death with a hockey stick was fined $1,000, despite a judge stating his “actions went far, far beyond what could be considered reasonable discipline for an animal.”

In 1996, a man angry about his cat knocking over a garbage pail broke the animal’s leg. He was acquitted of animal cruelty as a Newfoundland court deemed the act accidental.

Michael Hill’s case, on the other hand, may have been influenced by a surging social media campaign that arose after the story was originally published.

An online petition demanding justice for Hill’s victim drew more than 60,000 signatures. Some of that virtual rage spilled over into real life on Monday, with dozens of animal welfare advocates showing up in court and pelting Hill with insults.

Denied bail last month, the 32-year-old has spent his days since mid-December in solitary confinement – a measure taken, his lawyers say, because the other inmates posed a threat to his safety.

“Michael confessed right from the very beginning,” his lawyer Ahmad Ammar told reporters outside the courthouse. “It’s something he wanted to get behind him. He recognized that he did something that he shouldn’t have done.”

And Justice, the 7-year-old dog who very nearly died an anonymous death in a stretch of field?

“The wounds to his muzzle are healing well, and they’re definitely not holding him back from claiming every stuffed toy he can find for his own,” the Windsor/Essex County Humane Society wrote in a Facebook post.

For now, Justice remains in the humane society’s care while he continues to recover.

Eventually, he will be looking for a real home.

If you would like to help the Windsor/Essex County Humane Society in its mission to support hundreds of dogs in need like Justice, consider making a donation.