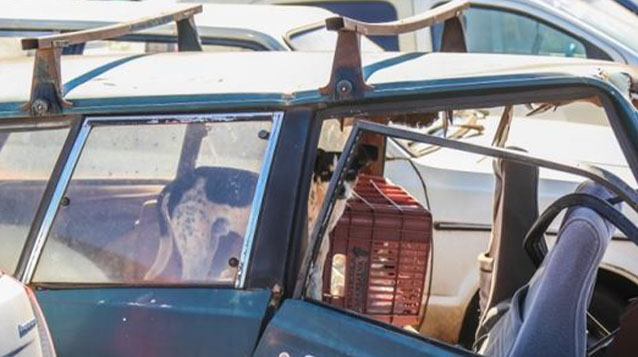 A faithful dog’s heartbreaking vigil for his owner has finally come to a happy end – all thanks to one person who took the time to help him heal.

Menino’s sad tale started last September, when he survived a car crash that killed his owner while the pair was out for a drive together in Mato Grosso do Sul, Brazil. Since there was no one on hand to take the dog, crews cleaning up after the accident simply towed the car away to a storage yard with Menino still inside.

Though the family of Menino’s dead owner had promised to arrive and take him home, no one ever came. Alone and forgotten, the dog remained – taking refuge in the wreckage of the car, hoping, perhaps, for his owner to return.

Days passed into weeks, and weeks into months, though someone ultimately did take notice.

Four months after Menino arrived, a security guard named David Guimarães Santos was hired to watch over the site. It wasn’t long before he noticed the skittish dog sheltering in the car each night and was moved by his ordeal. Slowly but surely, Santos began to earn his trust.

In time, the two became friends.

Menino continued to live in the wrecked car, spending his days with Santos on duty – but recently, the situation changed.

Santos was hired away to work security at a different location, meaning Menino would once again be all alone. Rather than let that happen, he decided to take the dog home, something no one else had been willing to do.

“I could not leave him there,” Santos told Campo Grande News. “If his rightful owners came, I’d give him up. But I will not leave it to anyone I do not know to take care of him.”

Last Friday, 10 months after arriving to the storage yard under the saddest of circumstances, Menino began his new life as Santos’ cherished pet. At long last, it seems, his heart has healed – and is growing bigger by the day.

“Now, it’s only joy,” Santos told Globo News. “When I arrive home, he runs to find me, jumping at the gate.”