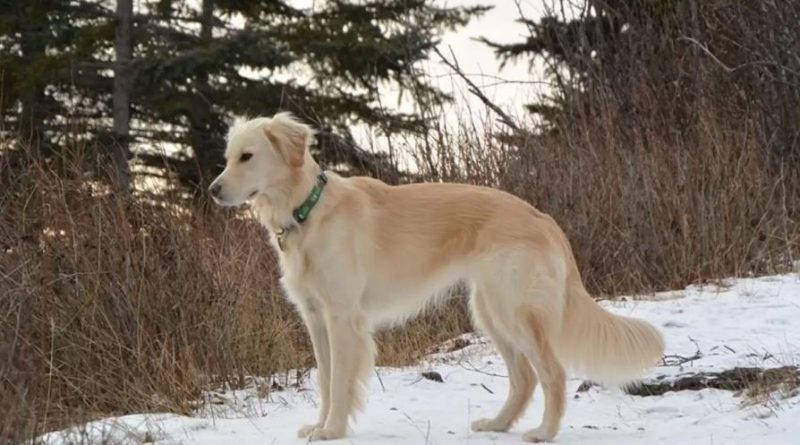 This heroic dog was just doing her American duty. Without her sharp eyes and loud, persistent bark, the injured bald eagle she helped rescue would have died alone in the icy Minnesota wilderness.

During a walk along the Sucker River, near Lake Superior, on January 20, Kenai, a 3-year-old golden retriever, saw something unusual.

In typical dog fashion, she started to bark at it, alerting her owner at once. As it turns out, she had spotted a grounded bald eagle. Kerrie Burns, Kenai’s owner, told GrindTV that she is trained not to chase after wildlife. Once Kenai got Burns’s attention, she stopped barking.

Along with her friend Pam Weber, Burns and Kenai approached the eagle. Immediately, they knew something was wrong when the bird didn’t fly away.

Instead, the eagle hopped along the river’s shoreline. Because it was almost nighttime and the trio didn’t want to scare off the eagle, they decided to leave and vowed to return the next day with help.

The following day, the location of the eagle became a bit of a mystery. Thankfully, the bird hadn’t wandered far from where he had been first seen. He even left a few clues …

… which led right to his location.

Two individuals from the Minnesota Department of Natural Resources, along with Burns and Weber, worked together to round up the injured eagle.

With patience and effort, the rescue effort was a success.

The eagle was taken to Wildwoods Rehab, a local wildlife rehabilitation organization. Peggy Farr, a board member and rehabilitator at Wildwoods, said the eagle, an adult male, was skinny, but not emaciated. His left shoulder was swollen, but there were no signs of a fracture, which Farr said indicated the eagle may have had a soft tissue injury. His feathers were frozen and had to be thawed.

While no one knows how the eagle was injured, Farr had one possible theory in mind. “Deer hunting season, rifle season, here is in the late fall and early winter,” she told The Dodo. “So during and after deer hunting season, we always suspected lead poisoning. We didn’t see any obvious signs of it, however … he was alert.”

Signs of lead poisoning in an eagle include seizures and respiratory problems. “Because lead is a neurotoxin, it slows down their reaction time,” Farr continued. “It makes them more clumsy, so they’re more likely to get hit by cars when they’re scavenging for roadkill. They’re more likely to have a clumsy landing and injure themselves. And so at this time of year, we always suspect it as an underlying cause.”

At Wildwoods, the eagle was given some much-needed tender, loving care.

From there, he was transferred to The Raptor Center in St. Paul, which specializes in the medical care, rehabilitation and conservation of eagles, hawks, owls and falcons.

The center confirmed that the eagle was in fact poisoned by lead and had a soft tissue injury on his shoulder. According to a Facebook post on Wildwoods’ page, eagles get lead poisoning from feasting on the caracasses of abandoned deer shot by lead bullets. Lead spreads from the entry point wound and into the deer’s meat. When the eagle eats the infected meat, lead then enters his bloodstream and has harmful effects on his nervous system and organs – especially the brain.

“Usually when eagles get lead poisoning, the levels are so high, that often times the Raptor Center ends up having no alternative but to euthanize them,” Farr said.

“So the fact that he may well make a recovery is really a cause for celebration. It’s not very common.”

She said that while the Raptor Center isn’t 100 percent certain that the eagle is out of the woods entirely, he has a fair chance at a full recovery and being released back out into the wild – and it’s all thanks to Kenai.