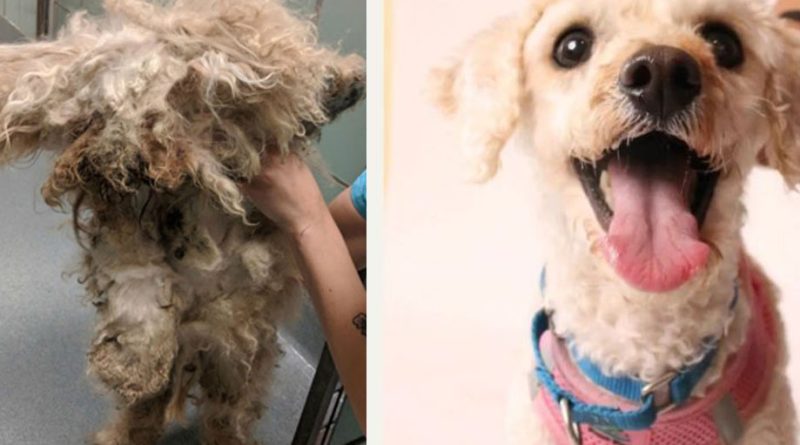 This is one of those stories that we love to tell. The kind that thrills us and touches our hearts making us believe that there is still a lot of kindness in the world. This is a story about an abandoned dog, who after 2 years of neglect, finally found hope. Unfortunately, there are still a lot of abused animals in the world but we are happy to see how people are willing to collaborate with this fight. A seven-year-old animal neglect case named Lionheart was surrendered to the Richmond SPCA dog shelter back in April by his owner. The small stray dog had been living under a bed for two years completely abandoned and neglected. His body was covered in thick mats, feces, his own urine making him not able to eat, drink or walk properly. You could see the sadness and great pain that he was dealing with for a long time. According to the staff, the dog rescue was “one of the most shocking cases of neglect” they had ever encountered and Lionheart was hardly recognizable as a dog. The animal shelter immediately reacted and took the little dog into their care. Without knowing much about his overall health and body condition, the dedicated team started shaving his matted fur and clipping his nails, to begin with. “In order to uncover the dog hidden beneath all this fur, he had to be sedated to be shaved” – tells the Richmond SPCA on their video about the first hours of his transformation. It took a few hours until the staff could see the little dog hiding under the matted fur. “Relieved from the weight and discomfort of his matted fur, Lionheart began to show his adorable personality.” And this all thanks to the wonderful Richmond SPCA team who did not hesitate and saved Lionheart’s life! Let’s admit that it’s clear to see that now Lionheart is filled with life, energy, and love. He looks nothing like he used to be before his doggie grooming transformation. Just look at those cute eyes filled with joy! “We are happy to announce that Lionheart is now in a loving, lasting home. We wish him and his guardian many years of happiness.”