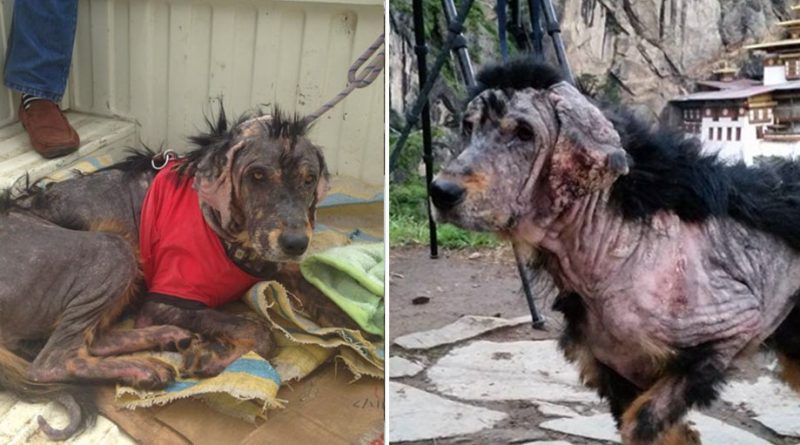 High upon cliffs overlooking the stunningly green landscape below, a dog was discovered alone and in desperate need of medical attention. 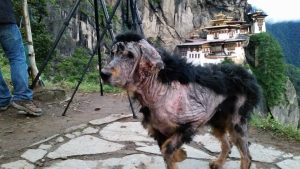 It was mid-September in a mountainous region of Bhutan, a country located on the eastern end of the Himalayas.

The dog was missing about half his hair due to mange and appeared to be caring for himself.

The team from TMF brought the dog to their rescue center in Paro, Bhutan, named him after his rescuer, Tim, and began treatment. 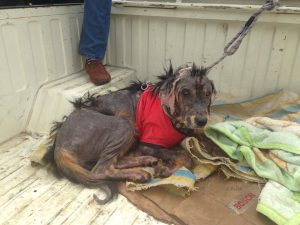 They shaved most of his remaining hair off gave him a small red shirt.

That’s a trick many rescue centers use to not only keep a dog slightly warmer, but also to comfort a dog. Covering a dog’s chest can often provide a sense of calm for dogs in unfamiliar situations.

It wasn’t even two weeks under the care of TMF and Tim’s skin already looked smoother and healthier.

And now? Several days ago, Gorski posted a photo of the dog named in his honor. 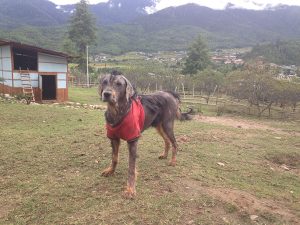 “This is how the world works, folks, through random acts of love and kindness rather than detachment and indignation,” Gorski wrote in a post. “I urge everyone to not simply walk by when you see an animal suffering. Take the time. Connect with the animal. Make the call if need be. But do something. Don’t just walk by feeling sorry or helpless because you are not.”

Thanks to Gorski’s eagerness to help animals, Tim is furry and happy once again.