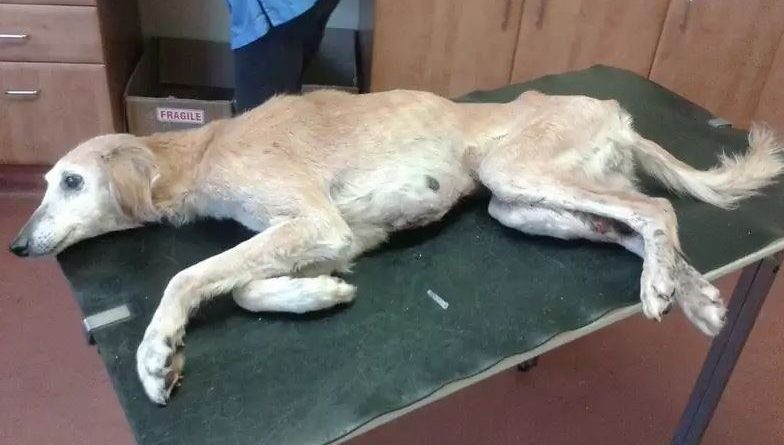 There are no green acres for retired hunting dogs in Ireland.

No master’s voice calling them home for good.

No curling up by the fire to warm those world-weary bones.

When she outlived her usefulness in the field, all Merci could expect was a place to curl up and die.

The 10-year-old sighthound, also known as a lurcher, found just that in a farmer’s shed.

Then, unexpectedly, she found mercy.

Someone spotted the ailing animal and got in touch with Gina Hetherington, founder of PAWS Animal Rescue Ireland.

When they found her, Merci’s body was in terrible condition.

She was given a medical score of “1,” the lowest a dog can get and still breathe – meaning, according to the Veterinary Medicine Center at Ohio State University, there’s “no visible body fat” with ribs, pelvic bones and vertebrae “evident from a distance.” In a word, she was emaciated.

“The fleas were literally crawling off her head,” Hetherington says. “I’ve never seen an infestation of fleas like it. Ever.”

And her leg was little more than mush.

“You could see that the bone was protruding right through her leg,” Hetherington recalls. “God knows how long the poor dog was lying in that shed with that injury.” (How she became injured in the first place is still unclear.)

Veterinarians doubted she would even survive the surgery to remove her leg.

But, perhaps a testament to a dog prized for spirit and resilience, Merci did make it.

And, while she will be looking for a real home soon, at the very least, Merci won’t meet an anonymous end like so many of her kind have in these parts.

Sighthounds, also called lurchers in Ireland, aren’t actually a specific breed. Instead, the label spans a variety of dogs like greyhounds and whippets and even the towering Irish wolfhounds. What sets them apart from most other dogs is their speed – and a marked propensity to chase just about anything.

Couple that speed with an uncanny sense of vision and it’s no wonder sighthounds have traditionally been the toast of the hunting scene across Europe. For a time, at least.

Certainly by virtue of just being found alive counts Merci as among the lucky ones in a country that appears to hold little love for spent sighthounds.

In fact, over the last 20 years, she estimates the group has managed to find a home for a scant five lurchers in Ireland. Compare that to around 400 dogs the rescue rehomes annually.

Even the few people who call inquiring about a lurcher often have nefarious designs for the dog.

“You’ll get a phone call and you know straight away what they want the dog for. They want him for hunting. You just have to say, ‘I’m sorry, but we do not give out dogs for hunting.'”

“And anyway, if they were any good for hunting, they wouldn’t be here in the first place,” she says.

Instead, a handful of lurchers find their way to homes in Sweden. Even fewer trickle into rescues in the United Kingdom.

“Now, the rescues in the U.K. are so full of Irish lurchers they’re not taking them anymore,” Hetherington says.

Hetherington has found lurchers dumped dead on the side of the road.

She has rescued lurchers like Cara, who had been living in such bleak conditions, she could only press her face into the corner of her kennel.

After their ‘usefulness’ is spent, lurchers may top the list of Ireland’s most unwanted. Merci, who had hauled herself into a farmer’s shed to die, seemed to know it.

Merci is now in foster care. But in about a week, she will be ready for permanent home.