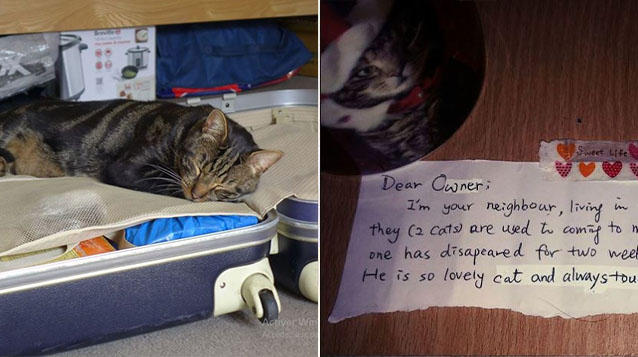 his UK-based couple was heartbroken when their pet Bear the cat suddenly passed away. Little did they know, however, that soon they would get a note from a stranger that would reveal something surprising about their beloved kitty.

While still alive, Bear was inseparable with his brother Teddy, who came home with a note attached to the collar days after Bear’s death. It read: “Dear Owner; I’m your neighbour, living in 4. I’m also your cats’ close friends as they (2 cats) are used to coming to my room everyday. But one of them, a bigger one has disappeared for two weeks. Is he ok? I’m so worried about him.”

“We posted a letter back into number 4, saying that our other cat had passed away. We also included our email address,” wrote Scott Ewels, one of Bear’s owners. The next day they woke up to a lengthy email. It turned out the cat’s friend was a lonely exchange student from Taiwan. She would practice her university presentations to him: “He would sit on her bed and listen… she didn’t have anyone else to practice with. Very touching… She even attached some pictures they had taken of my boys which warmed my heart,” Ewels said. The note was attached to Bear’s brother Teddy’s collar. Turned out it was written by a Taiwanese exchange student who is their neighbor The girl felt lonely and homesick, and Bear would brighten her days and even listen to her university presentations… Bear will be missed