Dog abandoned in severe malnutrition when she couldn’t have any more babies, finds love

Nina is a dog who lived under a bridge in the city of Rosenberg, Texas. Her life changed when some people notified the This is Houston animal protection institution , who went to the place to help her.

Staff from the nonprofit arrived and were able to see her, they weren’t sure if she was still breathing because she wasn’t moving . It was after getting closer and looking at her in detail that they could realize that she was alive. The canine’s skin was practically glued to her bones, she was extremely weak.

He had a lost look, a kind of whitish layer covered his two eyes, it was evident that he had lost his sight. Despite her condition, her dog was fighting with all her might to survive, she wanted to recover.

Nina was straining beyond her ability to get up.

Faced with the arrival of the strangers, the canine made a great effort to get on her legs and tried in vain to take a few steps. Her forces did not accompany her, she had no time to lose, she was taken to a veterinary clinic to undergo a specialized evaluation.

From the way she was found, her clinical picture, and the information obtained, they realized that the dog had been used to have many puppies . That is to say, without any consideration they used it as a reproduction machine to, surely, later sell the puppies.

“It is likely that Nina was thrown away, she had too many medical problems to continue producing puppies, so she was neglected and thrown out,” it was known in a digital media outlet.

Seeing that her body was already deteriorating and she was not so productive, they decided to leave her to her fate without the slightest consideration. From that moment on, the furry one became an easy prey for diseases and hunger.

They began medical treatment to attack the infections. She collaborated with everything with joy and enthusiasm , and after a few months with a lot of patience and dedication, the fruits of the medication that had been given to her began to be seen.

The dog was not resigned, she was determined to get out of the bad trance she had to go through

Despite all the effort made, the eyes of this furry could not be saved. Fortunately, as the days went by, the physical and mood improvement was noticeable . Her staff was happy to have her, they loved her very much and they always showed it to her, she returned the affection with a vengeance.

The willpower and perseverance that Nina drew from within to heal and move on with her dog life is admirable.

The entire time after she was rescued, she was in the care of a foster family . This is Houston shared the case of the dog on her social networks and Internet users were delighted with her.

Everyone sent her nice messages and that way many interested in having her arose. In fact, her new adopters have already appeared, and the canine could not be happier with her, she knows that she will soon have a family that will love her and she will give them all the tenderness that she has kept for so long.

Soon a different life begins for Nina, and we will surely hear about funny episodes about her and her family. And hopefully stories like these help people become more responsible with their pets, and increase the number of adoptions of street dogs. 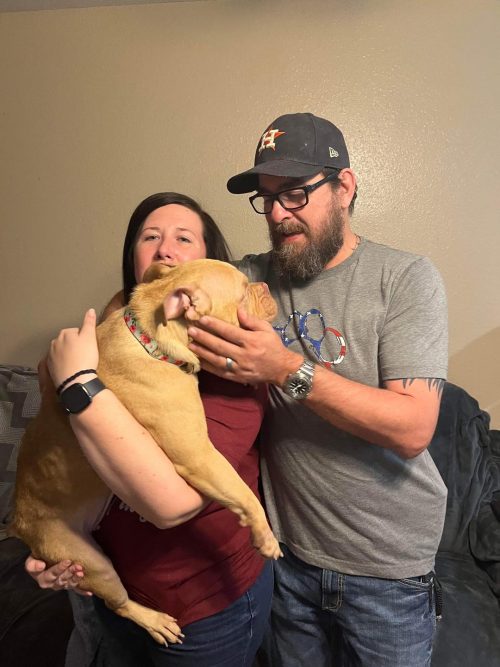 Nina is the best example that there is always hope. You don’t give up either and do everything to make a better world for animals in trouble.