The 6-month-old golden retriever named Todd was bitten on his face when he tried to save his owner. The dog is man’s best friend.💖

Paula Godwin is one lucky woman, for not all of us have pet dogs who would take a bite from a venomous rattlesnake for us

Something similar happened when a woman from Sedona, Arizona almost stepped on a rattlesnake — her 6-month-old ‘hero’ puppy leaped in front to save her human ensuring she was safe.

Unfortunately, the rattlesnake attacked Todd by biting him on his nose and leaving the pup with massive swellings on his face.

According to local reports, Paula immediately rushed Todd to an animal hospital in Anthem where he was treated for the venomous snakebite. He is now recovering well.

She took to Facebook to share the story of Todd’s amazing bravery along with photos of the pupper’s swollen face and bandaged leg.

She wrote in a caption accompanying the photos.

“It was a beautiful morning but as we were walking down the hill I literally almost stepped on a MF rattlesnake. But my hero of a puppy Todd saved me. He jumped right in front of my leg were [sic] I surely would have got bit.” 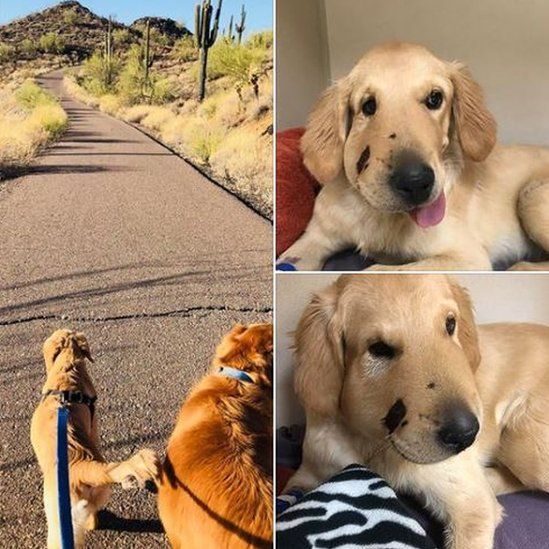 Luckily, the little angel is recovering well after he received quick medical attention. He received the anti-venom quickly and after a stay at the hospital for about 12 hours, he is back home.

After this life-changing attack, Godwin has started a GoFund Me page not for Todd but for other dogs, who might need financial assistance during such medical emergency

God bless you and your mom get well ❤️‍🩹❤️‍🩹💕💕 sonn

Spread this good news by sharing this story!💖🙏