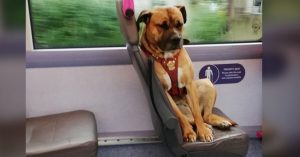 Last week, the 620 First Bus in West Yorkshire picked up a lonely traveller. An abandoned Staffie-mix boarded the bus in Bierely and then sat all alone, breaking everyone’s hearts.

She sat quietly in her seat and looked around with sad eyes while she sniffed the air as if looking for someone who wasn’t there.

Her fellow passengers looked after the forlorn little vagabond until the bus reached its final stop and the staff could take her off the bus.

She was then taken to Cliffe Kennels where she was nicknamed Olive and looked after while waiting for her owner to appear.
However, days passed without anyone coming forward to claim her; it looked like she was truly alone in the world.

But Olive’s luck was about to turn. Gemma Burton, who’d ridden the bus with Olive, had snapped a picture of the doleful pup and shared it on social media in the hope of reuniting Olive with her owner. 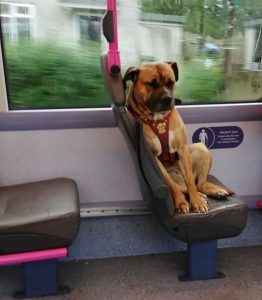 Gemma’s post quickly went viral; it was shared thousands of times on Facebook and the story was picked up by various news sites. People from all over the world were sending their love and hoping to give Olive her happy ending.

Now it seems like that happy ending has come. While Olive’s original owner hasn’t come forward, several people have reached out and expressed their wishes to open not only their hearts but their homes to Olive.

Denise Ball, the owner of Cliff Kennels, says that Olive will go to her new home very soon.

Olive’s happy ending might also mean a new start for several other lonely pups. While only one family can adopt Olive, there are many other dogs currently looking for a forever home. Denise hopes that the people who miss out on adopting Olive will consider visiting Yorkshires rescue centres and give another dog a loving home.

Olive’s lonely days are almost over and we are sure that she’ll be very happy in her new forever home.

Please SHARE this story with your friends and family.