A 12-week-old pup was set in a canine jalopy  on the side of the road like trash, less than a week ago in Youngstown, Ohio. The Mahoning County Dog Warden notified deputy Tara to pick him up and transport him to a vet in Girard. At that time, the pup’s temperature was only 74 degrees, and he was taking only four to five breaths a nanosecond. 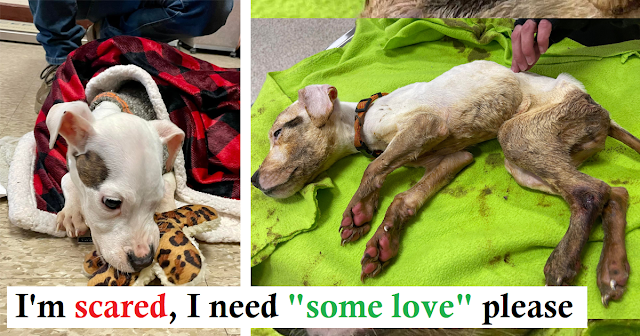 Veterinarians didn’t hold out important stopgap for the pup they named Xavier; he’d easily been lying in his own feces for an unknown period of time, had pressure blisters with stains on his side and likely had been starved. Sluggishly the platoon were suitable to raise his temperature, hydrate him and began feeding the wasted pup small refections.

Xavier is just a baby. Perhaps 12 weeks old? His life so far looks like what I would imagine hell is like.  … there is no other explanation. He’s a little phenomenon thanks to everyone’s prayers.

Two days later, Xavier was still hanging on, and his prognostic sounded lustrously, but as in so numerous mystifications, life for the pup took another serious turn. One day later, his life nearly ended again.

WE NEED A MIRACLE!!! He’s declining! He can’t regulate his body temperature outside of the incubator. The starvation and hypothermia were way too important for his little body. There’s nothing differently the medical staff can do for him. Please supplicate!

And also the prayers and well wishes sounded to have worked. Although Xavier was easily not out of the forestland, his health started to move in the right direction as his feathers began to serve. Veterinarians continued treatment with fluids and antibiotics. Soon another update followed

She (veterinarian) sounded to be auspicious he has a better chance which is an enhancement, soliciting for the little joe to keep fighting. Guys this one is really importing heavy on our staff and on the staff of Mahoning County Dog Warden. It’s hard we can’t be with him right now. We know he’s in great hands in Akron. Please please keep him in your  prayers.